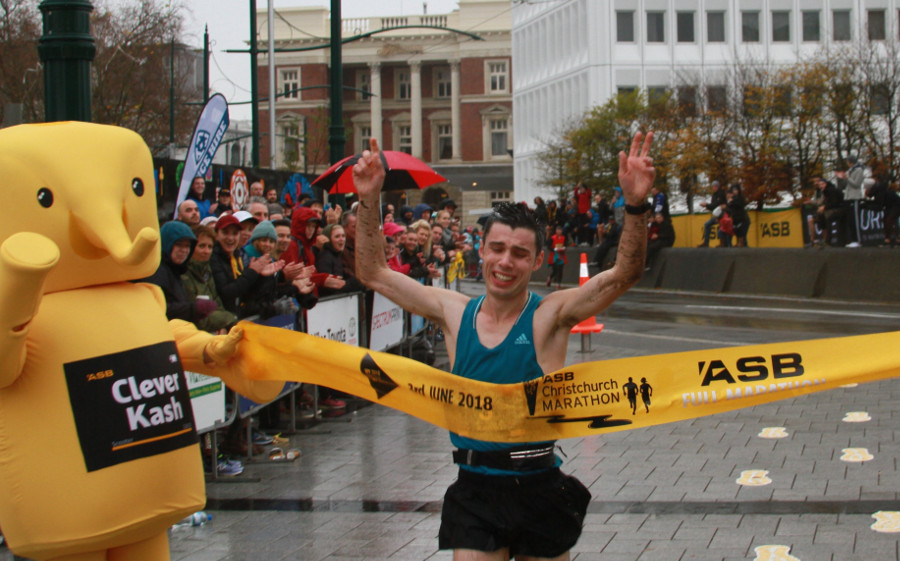 Almost 12 months ago British runner, Hannah Oldroyd, was a surprise winner of the South Island’s premier marathon event. The Christchurch-based 30-year-old had been in the country less than a year when she ran away with the ASB Christchurch Marathon. Finishing hand in hand with her partner, Steve Darby, she was a crowd favourite, so imagine the local response this year, when despite going from unknown to odds-on favourite, she romped away to win again.

Oldroyd and the 4000-plus other starters would be forgiven for feeling a touch of deja-vu when they lined up in Cathedral Square this morning in the same cold, wet conditions as 12 months ago. But it failed to dampen the spirits, with fast times and foreign winners being the order of the day.

Hannah Oldroyd isn’t really a foreigner any more, but she was always the favourite. For more than a year she has been unbeaten nationally over the classic 42.2k distance. It started in February 2017 when Oldroyd announced her arrival on the national scene at the Buller Marathon. She then won in Christchurch, the ASB Auckland Marathon, the Queenstown Marathon and Buller again this year. Then in April, Oldroyd returned home to England for the famous London Marathon, where she finished second among amateur women in a personal best time of 2hrs 46min 27secs.

Back at the ASB Christchurch Marathon, however, she didn’t have it easy. West Coast police commander, Mel Aitken, didn’t run here in 2017 but she has done some of her best running at the ASB Christchurch Marathon. In five starts Aitken has never been worse than fifth, including second place in 2015 and 2016 and third in 2014.  Last year she turned 40, thumbed her nose at age by running her fastest ever time at the Gold Coast Marathon with 2hrs 47min 42secs. So she was more than capable of ending Oldroyd’s reign. Except no one told Oldroyd.

The defending champion simply led from start to finish. Aitken followed her closely for 10k, but the tall rangy Brit’ moved away into the chilly headwind between 10k and 19k. Aitken held her in the tail wind, but when they turned into the wind again between 31k and 37k the Brit ran away once and for all. At the finish line she was five minutes ahead, stopping the clock at 2hrs 48min 06secs to record her third fastest marathon.

“That was pretty tough,” said the beaming winner on the finish line. “I only got back from overseas on Wednesday and I was at the pub last night with friends. I felt ok, but I got really cold in the second half.”

Behind the still unbeaten winner, Aitken held on for a solid second place in 2hrs 53min 42secs. Behind her 2017 runner-up, Lisa Brignull (Chch) was pleased to nab a podium spot again in a personal best time 3hrs 04min 35secs, just two minutes ahead of fourth and fifth placed Letha Witham (Wgtn/Ireland) and Meg Ryan (Chch).

In contrast to the women’s full marathon, the men went anything but to the form book. Favourite was 2016 winner Dougal Thorburn, but it was Australian Brett Ellis who set the tone on race day. The 23-year-old Melbourne runner ran from the front, leading Thorburn by 20secs at 10k and then extending that lead steadily throughout.

“It was tough out there,” said Ellis after winning by three minutes in a personal best time 2hrs 27min 39secs. “It was windy for a while and the rough roads in the earthquake zone (red zone) were challenging sometimes. But when we turned around with the wind behind for the final 5k I knew it would be OK.”

Another Australian to produce a career-best run at Christchurch was Canberra’s Brad Crocker. The 37-year-old dominated a classy collection of younger Kiwis, using his experience to set a fast tempo that saw them drop away one by one.

“At the 10k mark we turned into the wind and no one was willing to help with the pace,” said Croker. “So I thought ‘bugger them’ and decided to push on by myself.”

Croker admitted wondering if he had been too bold. The Canberra teacher endured 11 hours traveling to Christchurch and revealed, “My back and hip were a bit sore from all the sitting and I was a bit worried in the last 5k. But by then we had the wind behind us and I was pretty confident I could hold on.”

The Australian did more than hold on, however. He stopped the clock at 1hr 05min 38secs, which was a personal best time by over a minute. Behind Crocker, Auckland’s Aaron Pulford was satisfied but bemused. In six starts in Christchurch, the 27-year-old has finished on every step of the podium except the top, with second in the last three years plus third, fourth and fifth in the three years before that.  But in his first race since November following injury, Pulford was pleased to be just 46 seconds off the win, and equally pleased to hold out young guns Dan Jones (Wgtn) and Mike Voss (Rotorua).

While just about every race was won from the front by foreign runners, the women’s half marathon was won via a superb display of pacemaking and strength by a doctor from the mighty Waikato. Cambridge runner, Alice Mason, was one of the favourites, but she had to come through from 3rd place in the final 8k.

The several-time national champion came into the race unsure of her form after winning the New Zealand marathon title in Rotorua just five weeks ago. She sat off the fast early pace of 2016 winner and co-favourite, Olivia Burne. Burne had super-vet Sally Gibbs for company through the first 8k, but she pushed even harder to be alone out front by 12k.

Mason, however, has history in Christchurch. In 2015 she won her first ever full marathon here. Between 10k and 16k the runners faced Christchurch’s cold easterly wind and as Burne’s fast pace started to take its toll, Mason’s marathon strength saw her gradually cutting down the Aucklander to take the lead with 5k to run.

With wind behind, Mason pushed even harder and romped away to win by 400m in 1hr 17min 41secs. “I was a bit worried early on,” admitted the winner. “But when we turned into the wind I could see I was catching them.”

The women’s 10k, however, did go the way of the form book with Aucklanders Lydia O’Donnell and Penny Peskett leading the way. O’Donnell won in a fast 34min 19secs, while Peskett claimed the veteran title and second overall just ahead third placed Navajo Prentice, who claimed the junior title in a new record of 35min 55secs.

More than 4300 runners and walkers from 19 countries entered this year’s 38th ASB Christchurch Marathon, up 300 from 2017. “We’re really pleased with the entry,” says race director Chris Cox. “It shows that the event is finally starting to recover following the earthquakes.”

Cox says building up entries again is more important now than ever. “The cost of running this event has sky-rocketed since 2011 to almost half a million dollars. We’re forced to spend more than $100,000 on traffic management alone. So the event has to grow simply to survive.”

“The event is important for Christchurch,” says Cox. It’s a positive and popular community occasion and also a great showcase for the region. Around 1000 entrants are visitors to Christchurch, so there are significant economic benefits. But you know, first and foremost I’m a runner and we’re organising this event for runners and for the sport of running. It’s been a major part of Christchurch for 38 years, so it’ll be here at least another 38.”

ASB South Island regional manager Martin Gay says ASB is proud to once again be the principal sponsor of this world-renowned sporting event and to be able to support the Christchurch community in this way.
“We have total admiration for all those who have taken part in this iconic Christchurch event. Congratulations not only to those who took out the top places, but to all the participants who took up their own personal challenges and crossed the finish line. What an achievement!”

Online results can be seen at: http://live.tiktok.biz/results/christchurchmarathon/2018/
TRIATHLON