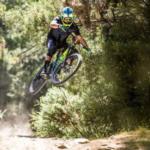 The mercury was rising on Signal Hill, Dunedin, New Zealand, as the final day of the Emerson's 3 Peaks Enduro saw the Enduro World Series (EWS) athletes storm the podiums. Keegan Wright, of Rotorua, held on to his 13-second lead in the final three stages to claim the men's title for 2017 while and Katy Winton, of Peebles, Scotland, managed to fend off Rae Morrison, of Nelson, to take the women's title.

Wright was not as dominant on Day 2 sharing the stage wins with Joseph Nation, of Christchurch, and Jubal Davis, of Colorado, USA. But Wright's 13-second lead from Day 1 proved unassailable as the three front runners jostled through the stages. Dunedin local Jake Paddon took fourth, just 48 seconds off the leader with Ethan Glover, also of Dunedin, a further 23 seconds back.

“We all won a stage each today," acknowledges race winner 21-year-old Wright. "It was good to do some blind racing with some good fast guys here and I'm stoked to come away with the win."

Wright has been to Dunedin to race once before. But that didn't end so well.

"I have only done one downhill race here and I crashed on my third run and broke my face. So I came here to get redemption on that rock that broke my face,” he laughs. “But this was just an all round good weekend of riding with awesome people and I’d like to spend a bit more time here. I can’t wait to come back.”

“I lost a bit of time on that second run yesterday and was a little bit off the pace, but I felt good today although I just didn’t have the legs on the couple of vicious climbs in the course – I was definitely feeling it," Nation admits.

Nation, who also races in the EWS circuit, finishing 22 this season riding for the Bergamont team had been advised by his coach to rest.

"I’ve had a rest since the end of the EWS season and perhaps wasn’t peaking for this race, but I still had a lot of fun riding here today."

Nation said the close racing made the event more enjoyable.

"It was tight racing and I think that is good for everyone – just behind me was Jubal (Davis) and he was only a couple of seconds back. We were all just consistently doing well.”

In third by just five seconds, Davis certainly showed glimpses of what he is capable of and had it not been for a bell-ringer in a training crash in the lead-up, he may have climbed higher on the podium. Behind him young Dunedin rider Jake Paddon showed he has the mettle to mix it with the EWS stars.

In the women's race Katy Winton was pipped 1-2-1 in the final three stages by her hard-charging friend and rival Rae Morrison. Both EWS racers are fiercely competitive, but Day 2 belonged to Morrison by a small margin of three seconds – not enough to rob Winton of the top step on the podium.

For Winton, the day was tarnished by a few tiny mistakes.

“I nearly high-sided in my first run, then a guy caught up so I had to let him pass – it was a bit of carnage,” laughs Winton. “Then in the second run I had a good clean run and hit the road gap for my first time. It wasn’t beautiful, but I landed it and was pleased with that."

The road gap is a foreboding leap of faith across a roadway on Signal Hill. Only the best riders can muster the commitment needed to clear it. Winton and Morrison both jumped it in their race runs for the first time and were the only women to do so.

Winton's run on the final stage was derailed when she clipped a tree.

"I hit a tree with my handlebars and they were really squint, so I had to stop and straighten them – but I didn’t get them straight, so had to stop again and get off to fix them," Winton recalls. "The rest of that run was so much fun, bombing that gnarly stuff after the climb."

She said battling with her friend was fun, but she was pleased to beat her.
“She’s a fast girl, so I'm happy to hold that down and enjoy it.”

Despite being unable to notch up her second 3 Peaks Enduro title, Morrison was happy with her weekend of racing.

“I won stages five and seven and Katy won the sixth stage,” Morrison explains. “In the final stage I was feeling good, but I caught up to Shannon Hope near the end and just as I passed her she had a huge crash and I heard the crowd go, 'ooohhhh'. Then once I finished she wasn’t there with me so I panicked a little bit and ran up to check on her. She was okay, but just super sore from hitting the tree. She had been doing so well this event and was really on form."

Shannon Hope, of Dunedin, was racing in the junior women's class, but was posting times that placed her third overall in the women's event and seeded to drop just before Morrison and Winton. Her fifth and sixth stages had her holding their wheel and comfortably in third. On her seventh and final stage, just 50m from the finishline she hit a tree. As we go to press she has been cleared of spinal injuries and released from hospital.

“My second stage was a bit too stop, start, not very smooth in the corners and I lost momentum and speed as a result," she offers. "A lot of the corners were washed out by then also and I was a bit tired.  But I am stoked to have still made the road gap – that was my goal – the first time I have done it. While we waited up the top the wind came up and I wasn’t sure about it. But I decided to go for it and that’s my big achievement from this race weekend.”

Ben Friel, of Christchurch, won the Junior Men's with six stage wins from seven and times that would have him close to the top 10 in the open.

Emma Bateup, of Nelson, won the Junior Women's after the dominating performance by Hope got cut short with her crash in the closing sections of the final stage.

One rider who "happened" across the event was 25-year-old Antoine Bizet, of Paris, France. The six-time Rampage rider (world's most extreme freeriding event) was in town chasing surf.

“I bought a surfboard here five days ago and so it coincided with the race," he laughs in his thick French accent. "So yesterday I had some good riding and I surfed. Today I only rode and now the raced is done and I am going to grab my van with my board and go surfing.”

Bizet has finished second twice at Rampage with a double backflip and a frontflip in what can only be described as a terrifying canyon course. But at the Emerson's 3 Peaks Enduro, he was here to have fun.
“I am loving the riding here – I didn’t know there was so much good riding in Dunedin so I hope to ride a few loops here each time I am back – I’m pretty stoked on that.”

“I wasn’t ready yesterday – I didn’t wear a neck brace – people say enduro is easier than downhill, so I didn’t take it," he says with a puzzled look. "I regretted that. There were some gnarly sections and I needed it. Today I wear it and I was able to ride more fully.”

“I have been loving the sunshine and riding with no shirt in the sun – it is snowing at home in Paris right now. So this is like paradise here for me.”

Bizet, who is based in Queenstown to train over summer and finished 45th in the race, was good friends with the late Kelly McGarry, a Kiwi rider who charmed and inspired the mountain bike world.

“Kelly was such an inspiration and had such an awesome vibe. Every time I speak about him I remember the times we shared and every time I remember how nuts this dude was and how rad he was," offers Bizet with a lump in his throat. "He is an inspiration for everyday life.”

You can't help but think that a little bit of that McGazza effervescence was flooding the 2017 Emerson's 3 Peaks Enduro with sunshine and good vibes.