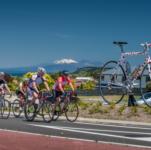 NZ's Largest Cycling Event is just around the corner

On Saturday 25 November thousands of kitted-out kiwis, and cyclists from around the world are set to join some of New Zealand’s most accomplished riders in the 41st annual Lake Taupō Cycle Challenge, the largest cycling event in the country.

Michaela Drummond is back this year hoping to win the 100km Bayleys Women’s Classic Race. It was a dramatic split-second finish last year, seeing Drummond come in an incredibly tight second. This is the first year that the elite women will receive the same prize money as their male elite counterparts riding in the 160km Holden Men’s Classic Race, which this year features ex-rowing champion-turned-cyclist, Hamish Bond.

The Lake Taupō Cycle Challenge is designed for participants of all cycling abilities, and spectators alike, with a range of free entertainment and activities on Friday evening, and all day Saturday – suitable for every age group, from the very young to the not so young.

“Live music and great entertainment adds a fantastic flavour to the event,” says Aaron Carter - Lake Taupō Cycle Challenge Event Director. “It’s one of the many reasons people come back to enjoy this iconic event every year.”

Friday morning sees the Maxi Enduro riders start their four-lap ride around Lake Taupō, while registration for the Bike Barn Round The Lake, a 160km circumnavigation of the lake, the 80km Half the Lake, 40km Bookabach Quarter Lake and the various Mountain Bike options, is open from 10am -10pm, along with the events Sport & Lifestyle Expo, which attracts around 15,000 visitors every year.

Aussie cycling legend, and Lake Taupo Cycle Challenge Ambassador, Robbie McEwen, will be riding the Bike Barn Round The Lake on Saturday and will be speaking in the Great Lake Centre theatre at 4.30pm on Friday 24 Nov. He will be sharing some of his experiences as a professional rider, along with tips on how to ride at your best.

A kid’s criterium is a welcome addition to the spectacle of Friday night’s traditional criterium races around Taupō’s CBD. It’s expected that competition will be as tense as always between the NZ Defence Forces, as well as the men and women’s individual criterium events.

“They’re fast and furious and the criterium races are great for spectators,” says Aaron.

Spot prizes remain a highlight of the event, and local musician Paul Foulds will help get everyone in festival mood in the lead up to the event’s main prize giving ceremony, where one lucky rider will win the ultimate spot prize of a brand new Holden TraxLS 1.4L iTi - valued at $32,990.

Back in 1977, event founder Walter De Bont had a vision to get 25 other riders together and cycle around Lake Taupo to raise funds for what was then the IHC charity. Now owned by the Lake Taupō Rotary Club, since 1977 the event has generated over $3.4m for community groups and more than $700,000 for Heart Kids, the event’s official charity. The not-for-profit event injects an estimated $7million into the Taupō economy every year.