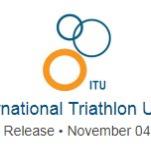 Joining Cook on the women’s podium was USA compatriot Taylor Spivey who claimed silver and Emma Jackson(AUS) who took the bronze.

On the men’s side, Spaniard Vicente Hernandez took second and Andreas Schilling (DEN) finished third, resulting in first world cup podiums for the year for both men.
The standard distance race that debuted in Miyazaki for only the second time in ITU history, was, for also the second straight year, the final race of the world cup season, putting the 2017 year to rest after an exciting 15-stop global tour that began in February.

After losing the inaugural Miyazaki title in 2016, Cook lined up for Saturday’s race bound and determined to change her fate in the final world cup race of the 2017 season. Dominating the field through the swim, bike and run, Cook snagged the title to collect her third world cup gold of the year.

2017 Miyazaki ITU Triathlon World Cup - Elite Women Results
04 Nov, 2017 • event page • all results
Results: Elite Women1.Summer CookUSA01:54:12
2.Taylor SpiveyUSA01:54:50
3.Emma JacksonAUS01:54:53
4.Valerie BarthelemyBEL01:54:58
5.Yuko TakahashiJPN01:55:02
6.Verena SteinhauserITA01:55:31
7.Yuka SatoJPN01:55:57
8.Angelica OlmoITA01:56:07
9.Joanna BrownCAN01:56:21
10.Ai UedaJPN01:56:33
Men’s review
He earned a silver in Sarasota and a bronze in Tongyeong, but Van Riel finally seized his much-anticipated gold medal in the Miyazaki World Cup. “I can’t be happier with how the season ended for me. Three podiums in the world cup, I didn’t expect that. I was hoping for one podium in one of the three races, but I have every medal now so I am very happy,” Van Riel said of his first career gold.
Coming down to a near-sprint finish, Van Riel just edged out Hernandez who claimed the silver, while the bronze then went to Schilling.
“I am happy with the race, I couldn’t expect anything better. I was in front and I finally lost in the final sprint. I felt a little tired because I raced a half distance, so I probably needed a little bit of a fast movement at the end. But I am pretty happy, it was a good finish for the season,” Hernandez commented.