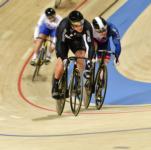 Both lost their first round contests against Olena Starikova (RUS) and Katy Marchant (AUS) respectively.
The pair is back on the track tomorrow for the first round of the team sprint after qualifying seventh fastest on the opening day.

Team sprint world champion Eddie Dawkins, fresh from success in the gruelling London Six-Day competition, was second in the heats of the men’s keirin. He was impressive in winning the repechage but could only manage sixth in the semifinal. He went on to finish fourth in the B Final.

Waikato’s Jessie Hodges had her first taste of a World Cup track event for New Zealand, finishing 19th in the women’s omnium.

She placed 10th in the scratch race, 10th in the Tempo, 19th in the Elimination and 15th in the points race to finish with 50 points in 19th place on debut. The event was won by versatile Dutch rider Kirsten Wild, who has won world championship medals on the track, road and time trial.

CAPTION: Olivia Podmore and Eddie Dawkins in action on day two of the UCI Track World Cup in Poland.
The images are free for editorial use only. Credit Guy Swarbrick.
TRIATHLON