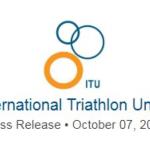 SARASOTA, Fla., UNITED STATES - It was a day of overcoming physical challenges as Japan’s Juri Ide conquered hot conditions to claim her first gold medal of the season at the 2017 Sarasota ITU World Cup.

Ide had the strongest performance on the day, beating out the competition by almost a minute, which brought her back to the world cup podium as it was her first world cup victory since 2011.
“Today was a very very hot and very very hard day, but I got my gold medal so I am very happy,” said Ide of her win.

She went on to explain of the challenges she has faced this year, “I have been hurt many times. This year I also broke my finger in WTS Gold Coast and was in a bike accident in WTS Hamburg. However, I still love triathlon. I realized it is important to practice without giving up, so from now on I will try to do my best in the sport. With the incident that happened in Las Vegas, the earthquake in Mexico and the hurricane damages in the U.S., thank you fororganising the race through all the serious and terrible problems.”

The debut race was welcomed with heat and humidity, that meant for some challenging conditions on the day. A couple days earlier the event was changed to a duathlon format due to over-forming amounts of green algae in the water, which meant the swim had to be canceled. The new course then featured a multisport run-bike-run format with distances of a 5-kilometre run, 40-kilometre bike, and a 10-kilometre run.

All lined up, the field started out for a one-lap 5k around the Nathan Benderson Park. Coming into the first transition Sodaro was leading with a marginal advantage, but heading out onto the bike with a larger chase pack behind her she was not going to do the full 40-kilometres on a solo ride. So as the chase pack caught her on the first lap, the new leaders were formed.

On the second lap the lead pack contained ten women, which included: Ide, Sodaro, Hauser, Katie Zaferes (USA), Dominika Jamnicky (CAN), Amelie Kretz (CAN), Taylor Spivey (USA), Chelsea Burns(USA), Adriana Barraza (MEX) and Maaike Caelers (NED). The frontrunners continued to gain time lap after lap over the chase group and as they entered the bell lap, it was up to over 90 seconds.
With the conditions proving to be testing for many women, the race saw 13 women who pulled out for DNF.
With that much of a lead created, the podium was secured to three women within the group of ten. Sodaro showcased her strength in the run discipline once again and pulled away right away. But this time Ide went with her and the run ran the first lap side by side. It was on the second lap however where Ide stepped it up and began to break away.
Ide looked fresh and comfortable out on the course, so lap after lap she only gained her stride. Her dominating performance brought her into the finish line to claim her first world cup gold since 2011 where she won in Hautulco, Mexico, proving her does well in hot-weather conditions.
Sodaro then found herself in a pack of three alongside Hauser and Caelers. It wasn’t until the final kilometres where Sodaro and Hauser pulled away to secure the last two spots on the podium. Both trailed in to claim their first world cup medals, first Sodaro and then Hauser 13 seconds later.