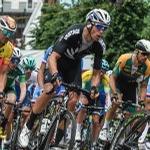 Slovakian superstar Peter Sagan emerged from the pack in the final kilometre of the race to hold off a fierce sprint from Norwegian hopeful Alexander Kristoff to claim his third successful world championship road race title.

Smith, who completed his first Tour de France for his Wanty-Groupe Gobert professional team, was taken out by a crashed rider late in the race. While the 24 year old, who finish in the top-10 young riders at Le Tour, fought hard to get back on, he caught up with riders getting dropped off the peloton.

With no chance of catching the peloton, Smith sat up to ride to the finish on the final of the 10 finishing loops in Bergen, featuring the climb of Salmon Hill on each lap.

“Dion had great legs today and was flying. He was managing things well in the peloton until Nicky Terpstra took him down in a crash,” said New Zealand Director Sportif, Craig Geater.
“As the pace picked up on the last couple of laps especially, there were quite a few crashes and unfortunately Dion was an innocent victim in this one.

“While he got back on relatively unscathed, he needed some riders to work with to catch the peloton, but there were only riders being spat out the back of the race. But he should be pleased with his efforts today and it might have been interesting if he had been able to push up to that group that fought things out because he possesses a good sprint.”

Earlier Patrick Bevin became ill mid-race and withdrew after five laps, while Bauer rode with the peloton until the pace went on with two laps remaining and he ran out of fuel in the legs. With his chances gone, he withdrew with a lap remaining.

After an initial break was inevitably caught, the peloton fragmented on the final two laps on the ascent of Salmon Hill with a group of 26 riders edging clear. They caught Frenchman Julian Alaphilippe, who had attacked on the penultimate climb, in the final 2kms before Sagan emerged to prevent a local Norwegian victory for Kristoff by the narrowest of margins.

"It’s not easy, guys. For the last 5km I said it’s already done. It’s gone. After I tried to go in the breakaway, and [Fernando] Gaviria tried to close, it came to a sprint, it’s unbelievable,” Sagan said. “It’s unbelievable for me. It’s something special for sure.”

Earlier a 10 strong group went clear shortly after the start, building their lead to 10 minutes before the large peloton reeled them in with 90kms still remaining.

While time trial winner Tom Dumoulin (NED) and Frenchmen Tony Gallopin and Alaphilippe tried to attack off the font, it was decided in a bunch sprint.