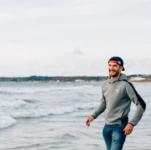 JERSEY (20 September 2017) - Scores will be settled and champions will arise at Super League Jersey this weekend with 25 of the world’s best male athletes competing. Most of them are reprising their Super League Hamilton Island appearances alongside notable and speedy additions to the roster.

Richard Murray, Mario Mola, and Jake Birtwhistle were the top three athletes after the racing on Hamilton Island, which occurred early in the general triathlon season. Since then, Mola has defended his world title and Birtwhistle has earned a mixed relay world championship alongside his Australian teammates including Matt Hauser, who has now also won a junior world title. Murray was in the running to end the year ranked third in the world and took two bronzes and one silver on the world triathlon circuit. However, in the end he was bumped down to fourth by Kristian Blummenfelt, who made his mark on Hamilton Island by winning the first two of the three stages in the Eliminator and then racked up three silvers and one bronze on the circuit.

“Super League Hamilton Island was the springboard for many of these men’s epic seasons,” says executive chairman and co-founder Chris McCormack. “They were able to showcase the qualities that have led to their success this year. At Super League Jersey that’s going to make them a target for the athletes who either have a score to settle from the previous event or have never raced them in these formats.”

Jonathan Brownlee is one of those new entrants; after missing Hamilton Island due to injury, the dual Olympic medalist and two-time sprint world champion is raring for a go over the Triple Mix and the Eliminator, the two formats featured in this weekend’s racing. While Brownlee has shown himself a force to reckon with over shorter distances, the even shorter supersprint distances and multiple stages over two days will be a new experience. “The exciting thing is it’s something completely different, completely new,” he says. He looks forward to racing on what he considers home soil. “The British seem to put on incredible sport events. We’ve got lots of people watching and have a good culture of support in sports. And I think Super League will be another great British race.”

With the racing over the Triple Mix format at Super League Jersey, the three stages will mix up the three disciplines of triathlon: Stage 1 is swim-bike-run, Stage 2 is run-bike-swim, and Stage 3 is bike-swim-run. Athletes will need to tap into their speed from the gun in Stage 1 due to the pursuit starts in Stages 2 and 3. They will start the succeeding stages in the order they finished the previous stage, separated by how much time they lost to the preceding finisher. This is slightly different from the mechanics used on Hamilton Island, where athletes started each stage at the same time. “We want to reward the fastest overall on the day, and the pursuit start allows that person to cross the final finish line first,” McCormack reveals.

Had this been done on Hamilton Island, Richard Varga would have won the day thanks to his quick times in the water and on the bike. “I was proud to finish fourth in points after three days of racing on Hamilton Island, but definitely this adjustment in the Triple Mix will suit my strengths,” Varga says.

Day 2 features the Eliminator, where over three stages of swim-bike-run the slowest athletes will be eliminated. Stage 2 will star the Top 15 from Stage 1, while only the Top 10 from Stage 2 will go on to Stage 3.  On Hamilton Island, Murray could afford to come in third in Stage 3 as he had already amassed a nearly insurmountable points lead from two previous days of racing.

But in Jersey with only two days of racing over which to rack up points from finish standings, it will be imperative not only to survive through to Stage 3 but also finish well.

Ben Kanute is one of the world’s best over the supersprint distance, securing the fastest overall swim-bike-run split in the 2016 mixed relay world championship win he shares with Team USA. Yet it remains to be seen whether he can replicate this feat over multiple stages with a scant 10 minutes between them. He is also coming off a runner-up performance over the half distance two weeks ago, which may impact his fleet-footedness.

“I set out to win every race I start at, so everyone is a target for me,” Kanute says. “Look for me to go off the front on the bike and shake things up. Everyone else out there, just try and hold my wheel.”