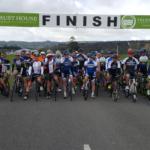 A Chilean rider and his team took early control of the 2017 Trust House North Island series held in the Wairarapa on Sunday.

The opening race of the five series event was held in the Gladstone region and attracted 178 riders from all over the north island competing in a 12km Team’s Time Trial (TTT) followed by a 60 -90km Road Race in a course located on the rolling, rural roads around Gladstone, on the outskirts of Carterton.

In the Masters Grade One, Wellington team Roadworks Reparto Corse lead by last year’s master’s one grade winner John Randall took the race with a time of 16 minutes 53 seconds followed by Rivet Racing team, one second behind and the Cycle Nation team from the Hawkes Bay in third place 17 minutes 13 seconds.

The afternoon Road Race for the 90km elite had two riders dictating the pace right from the start. Josh Page from Hasting riding for the Tank Guy/Bikebox team and Wellington Antony Nalder, they broke away after just 25km and quickly managed to form a lead of up to two minutes over the peloton. They stayed away despite some hard work by the main bunch over the last lap to reel them in. In the end Nalder took victory from Page with Madi Hartley Brown from Team Tank Guy/Bikebox coming in to take the Masterton Mitre 10 Mega under 23 classification.

The Masters Grade One 60km Road Race was dominated by team Cycle Nation from Hawkes Bay, they took the first three places in the race. Their riders were always in a good position to stop any attacks and in the end they took the victory with Chilean Nicolas Monroy winning the sprint finish contested by a large bunch of 36 riders, followed by team mates Stuart Kilmister and Gary Hall, two other riders from the team also place in 6th and 8th place taking a big lead in the teams competition for the series.

The Masters Grade Two was a close race with the bunch being together for the first 40-50km until four riders decided to break away, Total Home Theatre rider Huib Buyck was one of the riders, at one stage they manage to get a lead of 55 seconds, last time up Millar’s Road hill Buyck put the pressure breaking away from the three others and manage to win the race five seconds in front of Gary Anderson with Palmerston North John Steward in third place.

The second race in the Trust House North Island Series on Sunday 15 October is expected to provide riders with a new challenge taking on a complete new circuit never used before. Riders will race from Martinborough to Ngawi and return, this race promises to be one of the hardest of the series.