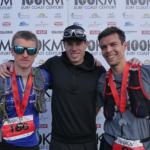 Ross Hopkins and Kylie Woods have been crowned champions of the Surf Coast Century 100km Ultra Marathon while Stephanie Auston and Simon Neale have taken the titles in the 50km race today at Anglesea, Victoria.

The sixth edition of the race saw over 1,100 competitors from across Australia and overseas journey 50km and 100km across an off-road course along the beaches, 4WD tracks and hinterland trails of Anglesea, Torquay and Aireys Inlet.

With defending champion Francesco Ciancio forced to withdraw near the halfway mark, Hopkins, 38 from Mansfield used consistency and pure determination to outrun his challengers in what he described as a distance not to be underestimated. He crossed the line in eight hours, 43 minutes and 31 seconds.
“Ryan and Joosep set a cracking pace to start with, one thing I’ve learnt is you’ve just got to hang in there, and you never know what could happen, you know, it’s a long way, so you’ve just got to keep chipping away, and keep grinding,” said Hopkins.

“The other two boys started to suffer through the course, and I was feeling good on the back half, so yeah it was a good outcome. I’ve been lucky enough to have been on the podium three times previously so it’s nice to get a win under my belt, it feels really good.”

After leading for much of the race, first-time 100km-runner Tammamae of Estonia finished runner-up in 8:56:27, and Ryan Cross (Eastwood, Victoria) took third in 9:08:00.

In what was her second appearance at the Surf Coast Century, Kylie Woods, (43 of Strathewen, Victoria) maintained her lead throughout to win in 10 hours, 5 minutes, 20 seconds; 12 minutes ahead of Nicole Paton (Melbourne, 10:17:28). International runner Angélique Plaire of Noumea rounded out the women’s podium in 10:23:59.

“I didn’t beat my last years’ time, but I felt so tired in Leg 3 today; I was just wanting to make it to the end, and I did so that’s awesome,” said Woods.

“I took my coach’s advice to just run in the moment, don’t think about what’s behind you or what’s ahead, just take one step at a time. I was lucky enough to meet up with Jason in the last 10kms or so, and we’re good company for pacing one another.

“Seeing my family out on the course, my husband, my two kids, and my Mum was so awesome, and of course the spectacular scenery, and all the other runners out there encouraging one another.”
The 50km race was held over a new course in 2017; the second half of the 100km course which is renowned for being the more difficult of the two.

For the second year in a row, Merimbula’s Stephanie Auston (26) showed her prowess to snatch the overall 50km race win in a time of four hours and 16 minutes, almost 25 minutes ahead of the field.

“I was running with a group of four of us at the front, three guys and myself, then we dropped two of them, then it was just me and the other guy, and on a bit of a descent I just got away. I was just trying to track down the team runners and the 100km runners; mentally if there’s someone to chase it’s quite nice,” said Auston.

“I ran here last year and I won the other end of the 50, but this is definitely the tougher half.”
Overall runner-up Belinda Ralph (Lavington, NSW) also finished strongly in 4:41:12, and first male over the line was Simon Neale of Hampton East, VIC, (4:44:50).

“It was a great course out there, so I’m pretty happy how it all went. I got a bit of a cramp in the last 15-20kms but I managed to work through it, so yeah, I was pretty happy,” said Neale.

Relay team ‘Duo The Humble Servants Of Bosco And Walter’ comprised of Blake Hose and David Byrne posted the fastest 100km time of the day in just seven hours and 15 minutes. While the fastest relay team of four was ‘Team The Happy Runner Torquay’ who posted 7:38:07.

The Surf Coast Century has built a solid reputation as one of Australia's must-do trail running events with no other 100km course like it in the world; featuring spectacular scenery and remote wilderness.
It is also considered to be an ideal event for those tackling their first ultra marathon; the course is challenging yet achievable, event logistics are easy and the event vibe is very supportive.

The 100km course can be completed by individual runners or relay teams (of up to four competitors) and the 50km race is for individuals.

The Surf Coast Century is organised by Rapid Ascent, an adventure sports event management company that is well-known for hosting challenging and professional off-road events.
Head to www.SurfCoastCentury.com.au for more information.
TRIATHLON