A perfect race day for Torpedo7 Peak to Peak 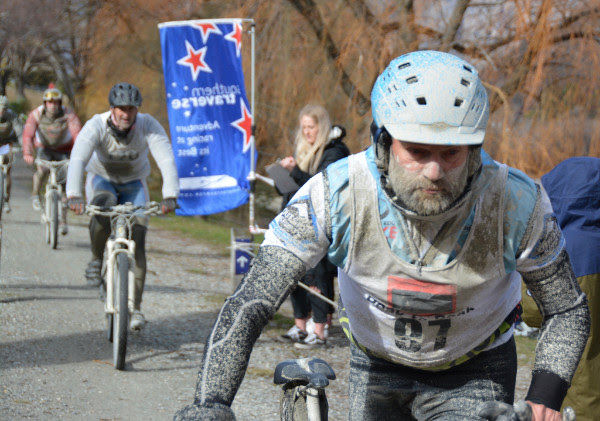 Hundreds of multi-sport athletes tackled the 24th running of the Torpedo7 Peak to Peak in near perfect conditions. Talented multi-sport stars of the present and past lined up alongside the weekend warriors to tackle this longest running winter multi-sport event in the country.

The forecast for the Torpedo7 Peak to Peak was dire in the week leading up to it but everyone awoke to starry skis and a calm lake.

The ski leg was held in near perfect soft snow conditions on the Calypso run in the Shadow Basin. Fresh overnight snow had melted on the upper access road and the mountain bikers  arrived at Frankton Beach coated in mud.  The smart racers had tear-offs on their googles but these lasted only a short time and there were many reports of cycling semi blind  peering through mud splatted lens

Runs rejoined the marked run on the waterfront and the race continued up the Gorge to the uphill cycle stage up Coronet Peak.

The 44km race starts on the top of the Remarkables, followed by a 17km mountain bike ride down the Remarkables access road. The competitors then paddle 7kms on Lake Wakatipu to Queenstown, run 9kms to Arthurs Point and cycle 9kms up to the Coronet Peak Base biking to finish on the snow.

Avantiplus Dunedin, racing in the teams vet division, lead the way off the ski followed closely by the entire field.

But this was just the beginning of the race and there was much to unfold before the finish line. Behind the team skiers the battle for the individual title was being lead by Eryn Cutler (Queenstown), from defending champion Hamish Fleming (Queenstown) and Rikki Griffin (Invercargill).

By Queenstown beach Fleming was leading the individual field with only three teams ahead. The race for top honours in the teams division was now being lead by Proactive Physio followed at the last change over by The Filaments (Dunedin)

Proactive Physio left the bottom of Coronet Peak with 4.30secs advantage over The Filaments but this was all but clawed back by superb riding by Kees Duyvestein and on the line Proactive crossed only secs ahead making for one of the tightest open teams race in recent years.

In the individual field Fleming went on to win comfortably but was heard to comment on the finish line “the hill does not get any easier”. This comment also reflected by the winner of the Vet Mens division Shaun Portegys (Alexandra)

The largest section of the race is the teams division with teams racing in the Open, Business, Mixed, Veteran and Womens divisions.

AvantiPlus Dunedin continued to set the pace in the Vet teams division and successfully retained the  ‘Golden Boot’ trophy for Vet teams. Their 11th straight win in this field, and their stranglehold will be very hard for any team in the future to break

A strong school teams field entered with 7 teams contesting the win and with high finishes in boys and girls teams showed that the future of multi sport is in good hands. The winners of the Junior School Division this year were the James Hargest College Junior with Team Theam JR in second place.

Last year the event opened up a Junior School division with two teams racing, Team 7 Torpedos and Remarkable Kids.  These two teams were made up of 9, 10 and 11yr old athletes from Queenstown The team 7 Torpedo’s backed up this year but are joined by three other local teams.

The High Schools Division was won by Southland Boys with a 4th place overall.

The Womens Team division was won by the Back on Track Physio (Queenstown) from the Weekend Warriers (Qtn and Dunedin) while the Mixed team was won by Funk Nose.

Hirepool (Queenstown and Christchurch) won the Business House division from the Hiko  (Queenstown) with QLDC Sports and Rec third.

One long time competitor decided that paddling the length of the lake was too easy and opted to swim. Luca Fornes swam from the Frankton Marina to the narrows and still finished strongly on the climb up Coronet Peak. He was awarded a spot prize from Torpedo7 for his efforts