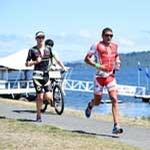 Terenzo Bozzone returns to the legendary Wildflower Triathlon this weekend. The five-time world champion holds the course record at the “Woodstock of triathlon,” having gone 3 hours, 53 minutes, and 43 seconds over the half distance to clinch the title in 2006, when he was only 22 years old.

“Wildflower Half was one of my first half-ironman races back in 2005. I’m looking forward to racing there again this year,” he says. “The course is one of the toughest out there so it will be a good test to see where my fitness is at leading into Ironman Texas and the rest of the season.”

Ironman Texas doubles as the North American Championship; the winner receives an automatic qualification to Kona. Bozzone also plans to compete at the Ironman 70.3 World Championship on the Sunshine Coast as a lead-in to the Big Dance.

Now 32 years old, Bozzone has been in the sport of triathlon for over 15 years as a junior on the ITU circuit then migrating towards long-course racing and his ultimate goal of winning the Ironman World Championship in Kona, Hawaii. That dream was within grasp until a recurrent Achilles injury and freak bike accident forced him to take long periods off to recuperate. He has since rebuilt into a better athlete; last year, he won three titles and finished on the podium at every race he entered.

He muses, “Being a more mature athlete I think it’s quite exciting because I’ve developed a lot mentally and emotionally and physically. That development is what you need to race well in Kona.”

That maturity helped him power through finishing 6th at Ironman New Zealand, where he had been in contention for the win through the swim and bike, before fading on the marathon due to effects of a bike crash days before the race. “When I crash my bike it tends to knock me around pretty badly,” the Kiwi reveals. “A pukeko, which is a native New Zealand bird, jumped out. I hit that, flying over the handlebars and bruising my ribs pretty badly. So I had to have a local anesthetic put in the morning to help me get through the race. Unfortunately that wore off at 18 kilometers into the run and so the second half of the marathon was pretty painful.” 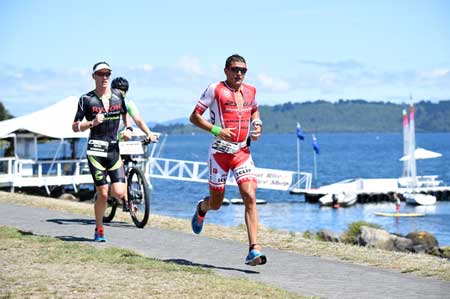 Despite the early setback this year, Bozzone is upbeat about the rest of the season. “I think sometimes those things that slow you down earlier on in the year kind of work well later on in the year because you’re forced to slow down a little bit. That way you still have lots of strength and energy when world champs come around.”

Having that downtime has also allowed the first-time father to adjust to life with his infant son, Cavallo. “He’s nine months now and we’re slowly getting into the swing of things. It’s definitely tough and definitely life-changing having a third person to worry about, but it’s really rewarding. Seeing him move around, I think he’ll have his first steps the next few months or so. It’s pretty exciting. Every time he smiles, it lights up your life.”

“T” has seen the sport grow, from Wildflower being one of the first races held over the half distance, to the current boom in new markets in Asia and the Middle East. He says, “With the development of triathlon in the Middle East region, it’s really exciting because that push, that kind of drive is something we haven’t really seen in the sport. I think that could really help triathlon -- or at least long-distance triathlon -- move to a whole new level. It’s just a matter of having people in our corner who can align and push us in the right direction.”