The inaugural Air New Zealand Hawke’s Bay International Marathon has smashed all predictions with all race categories selling out with almost 5,000 competitors signing up to be a part of what already looks set to become an iconic event on the running and social calendar, one that is as much about where the athletes are running as it is how far.

The weekend of May 14/15 this year will see those participants and an expected further 7,500 supporters and friends descend upon Napier for the first hosting of an event that also features a wine and food festival in the surrounds of the finish line at the stunning Sileni Estates Winery. 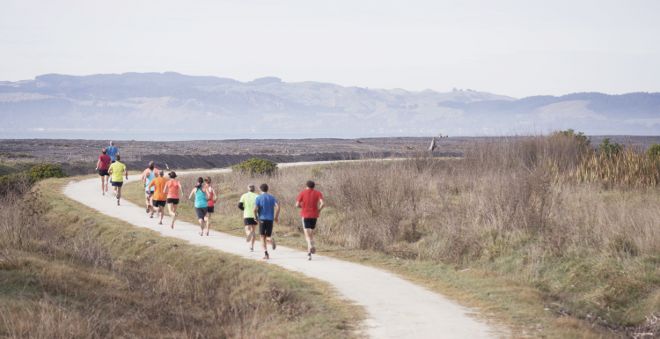 Athletes will take part in a variety of events including the Kids Run, AIA 10km Run, NZ Sotheby’s Realty Half Marathon and the full Air New Zealand Hawke’s Bay Marathon. All events are on Saturday May 14, allowing time to relax and explore the wider region on the Sunday.

IRONMAN Oceania Managing Director Dave Beeche says the response to the launch of this exciting event has been off the charts.

“There is no doubt that the excitement around the very first Air New Zealand Hawke’s Bay Marathon is down to the destination itself, with the event set to wind its way through wineries, bike trails, orchards and olive groves, all on beautiful hard packed trails that make the running easier on the feet just as the views and surrounds will be easy on the eye and mind.

“The finish line at Sileni Estates Winery is then something else and truly a great way to approach the end of the event. The competitors will wind their way up the amazing entrance to Sileni, running into an amazing food and wine festival that shows off the best of the region for both supporters and the competitors themselves who I’m sure will have earned a glass or two of the world class wine that is produced in Hawke’s Bay.”

Air New Zealand Chief Sales and Commercial Officer Cam Wallace says it’s great to see so many people travelling to Hawke’s Bay for the event, with 76 percent of entries coming from out of the region and 240 entrants coming from overseas.

“Air New Zealand is proud to be the naming rights sponsor of the Hawke’s Bay Marathon and help to attract runners and supporters to the region.”

Perhaps in another nod to the destination is the fact that 65% of the entrants are female, suggesting that the prospect of great food, wine and a weekend away is attracting women to the event as they ponder both the achievement of taking part, and the rewards on offer once crossing the line - not that the delights of the region are specific to one gender over the other.

Hawke’s Bay Tourism general manager Annie Dundas is thrilled at the popularity of the inaugural event.

“The Air New Zealand Hawke’s Bay Marathon will deliver a tremendous boost to the local tourism industry in terms of visitor nights and visitor spend. With participants and their supporters we will see a huge number of visitors and we are delighted that the appeal of our great climate, the amazing course scenery and endless food and wine options have attracted them to run the marathon and spend some quality time in Hawke’s Bay.”