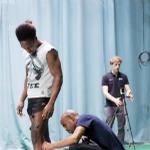 Researchers at Leeds Beckett University are set to investigate the mechanics of barefoot running.

Sports scientists from Leeds Beckett’s Carnegie Faculty are travelling to Botswana this month to undertake an extensive four-month research study that will gather biomechanical data from the local population in order to better understand the science of barefoot running.

The research will be led by Leeds Beckett PhD student Masalela Gaesenngwe, who is sponsored by the University of Botswana, under the supervision of Dr Nassos Bissas and Dr Brian Hanley from Leeds Beckett University’s Carnegie Faculty.

The team will use sophisticated equipment such as high-speed video cameras, electromyographic recorders and force platforms to undertake research in order to analyse the biomechanics of urban and rural Botswanan runners.

Dr Nassos Bissas, Principal Lecturer in Sport Biomechanics, at Leeds Beckett, explained: “Barefoot running has gained popularity in recent years, mainly because of its proposed potential to reduce running related injuries and improve running performance. However, it appears that the popularity of barefoot running is non-scientifically driven, but it is rather based on anecdotal evidence and/or non-scientific publications such as running magazines and blogs.

“This research study will focus on the biomechanics of barefoot running using habitual barefoot runners in Botswana as well as people who run in shoes.  In the majority of Botswana, especially as you go further away from the cities, prefer doing their daily chores barefoot, such as going to school, farms, cattle post and hunting. In remote regions, there are communities for whom barefoot dominates their footwear style. Such communities are still attached to their culture inclusive of barefoot practices under any weather condition.

“Humans have developed efficient running techniques through millions of years of evolutionary processes. However, these techniques were mastered by humans running barefoot or by wearing minimal footwear as modern running shoes were only developed and adopted by runners in the second half of the 20th century. Most of the research in running has examined habitually shod runners and it has ignored barefoot conditions even though they have influenced critically the way modern humans run.

“Understanding the biomechanics of barefoot running is essential to understanding human locomotion not only from a performance and injury prevention but also from an anthropological perspective.  The analysis of barefoot running mechanics can also offer invaluable information concerning the design and function of modern running shoes, something that will be central to shoe manufacturers designing running footwear.  This study will be the first scientific attempt ever to reach such population groups and gather biomechanical data through a systematic and scientific manner. We anticipate that the findings of the study will attract worldwide attention with the potential to impact current beliefs and practices in competitive running and footwear design.”
TRIATHLON