The 36-year-old Atkinson, who made a last minute decision to race just two days prior to the start, clipped the 20-year-old fellow Queenslander on the line in a time of 2 hours 11 minutes 16 seconds after a 1,500-metre swim, 30-kilometre mountain bike and 10-kilometre trail run in and around the rainforests of Ewen Maddock Dam in Landsborough. 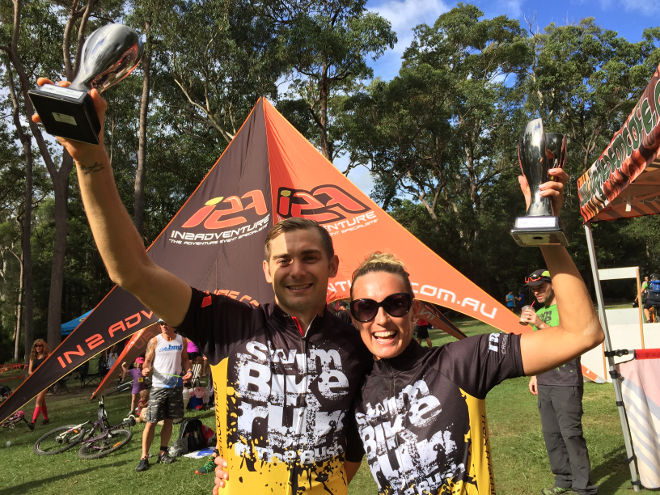 "It was a great course especially for people doing their first race off-road," said Atkinson, the 2015 OTU Oceania Cross Triathlon champion. "It made for good racing at all levels.

"It was a competitive men's field," he continued. "It's always nice to get a win, but mainly had a smile on my face all day racing around the bush."

Wollongong native and 17-time Xterra champion Ben Allen (NSW), who was looking to make history by becoming the first elite male and only second athlete in the event's six-year history to sweep all three Dirt Fest titles since Connie Silvestri (QLD) claimed all three with wins in Victoria, New South Wales and Queensland in 2012, finished third.

"I'm over the moon with series champ," Slack told In2Adventure post race. "It's awesome to race Renata, and it's makes for exciting and close racing throughout the series.

"It's a super location, and the camping makes for a great family atmosphere," she continued. "The course is fast and flowy, and certainly a great one for the newbies as it's lots of fun.

"I've been focusing on this race and the Xterra Asia-Pacific Championships weekend, so was stoked to get the win and feel in great shape.

"I'm the fittest and most prepared I've ever been, and I am looking forward to a successful 2016."
Joining Slack, is men's overall series champion Brodie Gardner (QLD), who finished fourth on the day just behind Allen.

"It's great to win the series as I felt I was very consistent over the races and it's been a goal of mine the past 12 months after I crashed out in Lake Crackenback, which essentially cost me last year's title where I ended up finishing the series in second," admitted Gardner, who is fresh off an Xterra Saipan win in March.

"As for yesterday's race, it was great to race in 'my backyard' with some good family and friends supporting me after the past couple of months travelling all over Asia and Australia to race.

"Obviously having home ground advantage, I was aiming for the win yesterday and the Queensland title, but it just wasn't my day with the quality field and recent work commitment," he added. "I've managed to have some really good racing the past few months, but I've also been working extremely hard setting up my business Intune Sports and Health where I'm supporting and training other athletes to achieve their own sporting and health goals which sometimes has to come before my own racing."

In2Adventure returns to the Sunshine Coast next week as it hosts the Mountain Designs Adventure Race Australia 18-hour Dark Side and 12-hour Dawn Attack, before turning it's attention toward the ITU Cross Triathlon World Championships at Lake Crackenback Resort & Spa in the iconic Snowy Mountains (NSW) – a historic first time in the Southern Hemisphere.