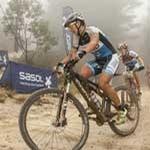 The 2016 Absa Cape Epic was special for the elite women competitors thanks to the new start batch and the trail-laden route … and there was the introduction of a “podium guy”.

The race introduced a separate batch for elite women racers after getting feedback from riders in the 2015 event. In essence the new batch was designed to make for a fairer race between the women and to make it more exciting for spectators.

And it seems to have worked: “The women’s race was finally what it should be – women racing women from start to finish,” said overall winner Ariane Kleinhans of Switzerland. “The change to a separate start batch was a groundbreaking improvement.”

“The introduction of separate starts for the elite women is a massive forward step for professional women’s MTB stage racing,” said Briton Sally Bigham, who was third this year after previously having won the Women’s category twice.

“It allows for a much fairer race amongst the women without the influence of the men,” said Bigham. “For me as an athlete the race was much more exciting, allowing a real race among the women. I also believe it provided a much more interesting race for the spectators and media alike.” 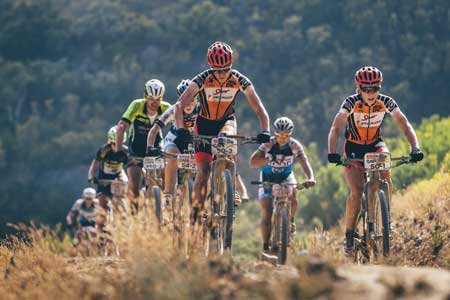 Kleinhans’s partner Annika Langvad of Denmark said: “It worked out very well in terms of making a fair ladies race. I am a big fan of the ladies having their own start batch.” The success was “especially due to the nature of the 2016 course” which consisted of many trails and where opportunities for drafting (slipstreaming) stronger male riders were limited.

“For sure it helped putting much more of a focus on the ladies race,” added Langvad. “The ladies’ bunch got a lot of media exposure and broadcasted pictures actually looked a lot like the men’s bunch. Normally you would not get such nice pictures of the ladies field.”

One issue they agreed needed another look was how to address the fact that some of the faster Masters category riders caught the women. Although it did not seriously impact on the racing on the 2016 course, it could do so on another route.

“This year the Masters passing the ladies was not a big problem,” said Langvad. “Except for the last stage, where due to the open and fast course it got very messy with the men mixing with our bunch.”

“But think ahead: what if the women’s race continues to grow and we would have a lot of very strong ladies teams that are able to draft a lot on the men? How would you really control that?” she asked.

Bigham said: “I think that in order for the starts to work better the Masters should either start 10 minutes after the elite women, or they should start 5 minutes before them.”

Kleinhans added: “I must admit; I didn’t expect it to work out quite as well as it did. There was really not much slipstreaming (of women behind men) happening this year. The characteristics of the route - more technical and a high amount of climbing - as well as the depth and quality of the women’s field were important factors to keep us separate from the men. Only the last stage, which contained more flat open roads, got a bit messy.” 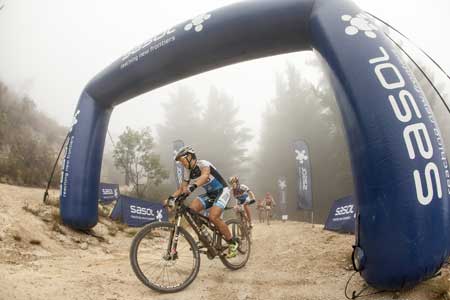 The leading women were also complimentary about the 2016 route: “I’ve raced six Epics now and this was by far the most entertaining route at this race,” said Kleinhans. “I think it showed in a great way what South Africa has got to offer in terms of mountain biking terrain. Apart from being much more fun to ride a lot of trails, it also allowed the women’s field a more separate race from the men.”

Bigham said “the 2016 route was, in my opinion, the best out of all of the years I raced: lots of very nice trails with minimal district road”.

And, finally, Kleinhans had a special compliment for the organisers who broke with cycling tradition, where so-called “podium girls” hand over flowers at the podium ceremony: “For the first time ever we had a podium guy,” laughed Kleinhans.