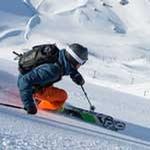 It’s the mountain everyone knows and loves, and now it’s official. Late last year Mt Hutt was voted New Zealand’s best ski resort for 2015 at the annual World Ski Awards, and all those proud Cantabrians who’ve known it for years can rightly say “told you so”.

The World Ski Awards is the only global initiative to recognise, reward and celebrate excellence in ski hospitality, and Mt Hutt was stoked to be voted tops in New Zealand by ski tourism professionals and consumers.

You literally can’t miss Mt Hutt – travel from Christchurch across the flat patchwork of the Canterbury Plains, then look straight up.

Jump on near the base building and the mountain’s Summit 6 seat high-speed chairlift takes you to the top of the world. Well, not quite, but it feels like it. It’s the highest point of any ski area in the South Island, and on a clear day from the summit you can gaze from one side of the country to the other, and see the Southern Alps stretching away into the distance. There’s a new webcam up there beaming pictures of pristine slopes blazing in sunshine way above the often cloudy Canterbury Plains.

The locals are openly proud of “their” mountain and that helps give Mt Hutt a very Kiwi feel and style. That’s not to say that skiers and snowboarders from all around New Zealand, Australia and further afield don’t love it too, for a whole range of reasons. 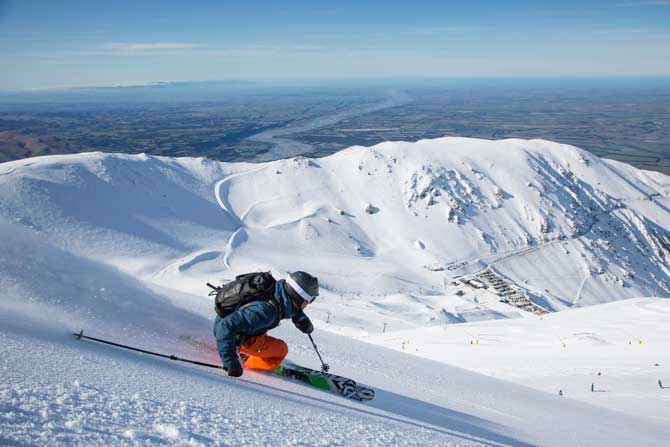 As always the machinery’s been out and about over summer creating new trails and terrain parks. A fantastic new beginner trail from the top of the Quad chair provides transitional terrain for guests who’ve mastered Highway 72 but aren’t quite ready to progress to Broadway.

The much-loved main Broadway trail is wider at the top, with the terrain park jump line relocated to a new mid-mountain terrain park zone that includes expanded progression freestyle terrain and an all-new skier-cross course. A widened Virgin Mile trail leads to a new groomed black run called ‘Hydroslide’ for those who already love the gnarly steeps off the Virgin Mile heading out to the infamous Rakaia Chutes (only open when snow conditions permit).

When it snows at Mt Hutt it can really, seriously snow – with storms in the past known to dump two or even three metres of the white and seriously fluffy stuff on the slopes over a couple of days. Funnily enough, when the road’s cleared and the sun comes out there’s often a rash of illnesses striking local businesses throughout Canterbury and Christchurch!

But sometimes even Mt Hutt needs a helping hand to keep the trails fresh, so snowmaking in 2016 gets a boost with two new, powerful fan guns joining the mountain’s existing arsenal, along with more fully-automated lances on Fascination.

When it comes to eating and drinking during a well-earned break, a tasty new menu featuring fresh ingredients and baking from local suppliers, along with matching wines are on offer at Hubers Restaurant – sounds delicious! Kitchen upgrades and extensions ensure the Sky High Café and espresso bar deliver a wider range of food and drink a whole lot faster. Just what you need to fuel the next few runs.

There’s no need to hire gear in Christchurch or Methven and bring it up with you – a comprehensive refresh of rental skis, boards, boots and helmets mean there’s always the very best range available when you’re on the mountain, and ski and snowboard technicians make sure all rental gear fits and works perfectly.

Need more reasons to love Mt Hutt? The totally unique Methven Kids 4 Free deal brings the mountain and village together, meaning every child 10 years and under gets a free lift pass every day at Mt Hutt, plus free accommodation and meals at participating business in Methven when accompanied by a paying adult.  There’s also free daily return mountain transport and free airport transfers between Christchurch and Methven.

First Tracks operates from 8am on Saturdays and Sundays (weather and conditions dependent). Bring the littlies and they’re looked after in the mountain’s warm and caring licensed Early Childcare Centre, and there are lessons and learn to ski or snowboard packages galore.

Even getting up there’s easier than ever – the access road’s been widened and more barriers added.