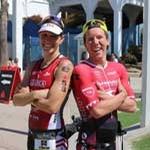 Bahrain Endurance season is revving up

The season for Bahrain Endurance is revving up with solid results from the weekend in Oceanside and Putrajaya.

Caroline Steffen used strong bike and run legs to clinch a second-place finish at Ironman 70.3 California. In her first race on U.S. soil apart from the Ironman World Championship in Hawaii, the Swiss speedster in racing red moved from eighth out of the water to fourth off the bike before running the day’s fastest half-marathon to grab the silver between Heather Wurtele’s gold and Heather Jackson’s bronze.

Steffen’s run, once an acknowledged weakness, has now become a weapon. “The run was a big battle with Heather Jackson. She got me, and I got her back, and she made it a tough day out there. Of course I wanted the win, but you can’t always win. I did the best I was able to today and pretty happy with my bike and my run. I’m still getting stronger and I look forward to the next race.” 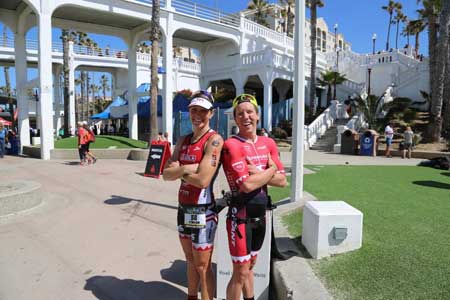 Sam Appleton stayed quite close to the front for most of the men’s race. After exiting the water in the front group, the young Aussie tailed uberbiker Andreas Dreitz through a majority of the bike leg before sliding back into the chase group and ultimately finishing eighth overall. He said, “It was pretty tough. I raced to the best of my ability against a super-stacked field, so I’m happy to come away with a solid result. It’s still early in the year for me. My main goal is 70.3 Worlds in September so I’m happy with where I’m at and hopefully we can build from here into the rest of the season.”

Fredrik Croneborg took on Asia’s hottest race at Ironman 70.3 Putrajaya. With temperatures soaring to mid-30 degrees Celsius, the Swede stayed in the mix from the swim through the bike in the chase group that included eventual champion Craig Alexander. Croneborg said, “Double weekends of racing completed! 70.3 Taiwan last week and 70.3 Putrajaya today. I did not have my best placings (6 and 6) in the results but happy with the swim-bike combo. The coming weeks will have run focus!”

The Bahrain Endurance Team now turns its focus toward Africa and the Ironman African Championship on April 10 where a stellar cast lines up with His Highness Shaikh Nasser Bin Hamad Al Khalifa in his bid to qualify for the Ironman World Championship.