Leading teams in the GODZone expedition event are riding the rapids on the Matakitaki river in Nelson Lakes today.

Chris Forne, Dan Moore, Sia Svendsen and Dan Busch of the Yealands Family Wines were the first team to white water paddle just after 6am this morning.  They have held the lead position in the race for the last 24 hours since overtaking team Swordfox back on the Red Hills during stage 3. 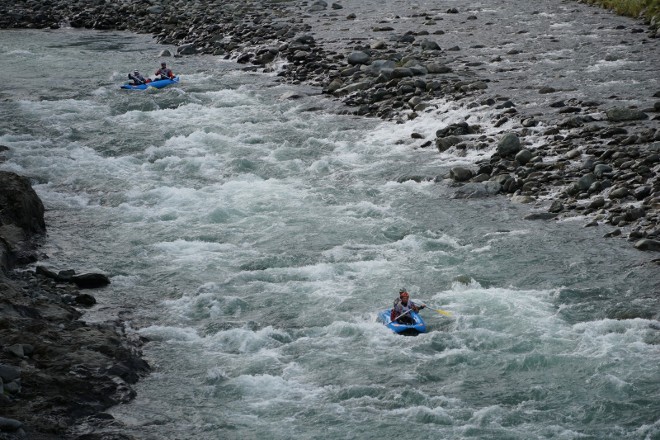 “The Yealands team pushed very hard last night trekking over the Moletops to arrive at the river this morning just as we lifted the dark zone,” says Race Director Warren Bates. “ They will have no idea how far back the second team are so their strategy of very little sleep has worked so far but may catch up with them later in the day.”

“Brent Edwards, the team captain of Swordfox is determined to close the gap. They took a faster route over the trek last night and managed to also bank a couple of hours of sleep. This puts them in a very good position to try and overtake when sleep eventually catches up with the Yealands team.”

The rest of the field are stretched across some 150km from Lake Rotoroa all the way back to the Richmond Ranges.

“Teams will really separate out today as the middle teams race to make the ‘short course’ cut off at the Matakitaki river on Wednesday at 7am,” says Bates.

“Sarah, Richie and team should be really pleased with where they are tracking at the moment and we hope are enjoying the race, particular the opportunity to eat race food like meat pies that they tasted at the St Arnaud store,” says Bates.