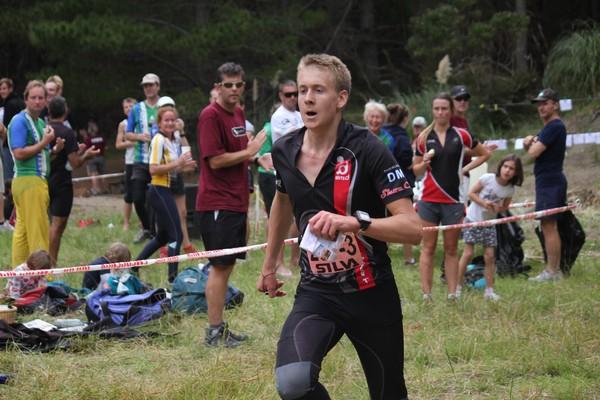 The Wellington Orienteering Champs were held in the northern Wairarapapa over Labour Weekend.  The Long distance was held on hilly intricate farmland typical of the region.  Local junior Nick Hann won comfortably in the Elite Men, while Lizzie Ingham, returning from working and competing in Australia was chased harder by both Laura Robertson and Penny Kane in the Elite Women.  In the Junior Elite Women rising star Kayla Fairbairn of Auckland was trailed home by locals Lauren Turner and Lara Molloy, while Callum Herries managed to hold it together for the whole race to win convincingly.

The highlight of the event, for the elite fields at least, was definitely the knock out sprint held on Sunday. Eketahuna was more of a prologue, one for the cameras but it still accounted for Herries and Canterbury elite Tane Cambridge as only the top 12 qualified for the semi-final (with the elite and junior elite fields combined). Rathkeale College was the venue for the real deal and it proved more than adequate. Detailed buildings surrounded by nice forested grounds gave just enough challenge at speed.

The format was two semi-finals of 6 in each gender, with the top two in each going through to the final along with the two fastest losers. In the womens first semi-final Lizzie Ingham disappeared off the radar early and required a great comeback to recover lost time and out-sprinted Kayla Fairbairn for the win. Penny Kane finished third and had an anxious wait to see if she would go through as one of the fastest losers. She just made it. It was Laura Robertson, Georgia Whitla and Piret Klade coming through in the second heat, and Lauren Turner just failed to upset Kane by 10 seconds.

In the men the first heat had the most depth and the six were only separated by 30 seconds. Surprisingly though it was Jamie Stewart, Shamus Morrison and Devon Beckman who qualifed with Tim Robertson the one left crossing his finger but to no avail though. Duncan Morrison spoiled our top sprinters party finishing a strong 3rd in the second heat to Matt Ogden and Nick Hann to knock Robertson out.

The final was perhaps slightly less dramatic, but only because of the dominance of two athletes, Matt Ogden and Laura Robertson clearing out their races. In the latter case it was definitely an example of the apprentice overcoming the master. Robertson's rival and coach Lizzie Ingham watching her glide into the distance.

After the sprint, the middle distance returned to the farmland for tight, intricate and accurate courses with a variety of leg lengths and direction changes. Nick Hann dominating after Matt Ogden made early errors. In the junior women two different contenders came to the fore, Sonia Hollands and Rebecca Gray, dominating proceedings and demonstrating their technical proficiency. It could have been Gray's day, but a lonely and late mistake let Hollands through. While in the junior men Callum Herries tore it up, with some of his competition running elites.