Andrea Hewitt (Canterbury) played a significant role in one of the more amazing World Series Triathlon events in recent memory on Australia’s Gold Coast Saturday and in doing so highlighted again her class as one of the most consistent of the world’s leading triathletes.

Hewitt won bronze in a remarkable display that said as much about her courage and mental strength, as it did her undoubted athletic ability as world number one Gwen Jorgensen (USA) was beaten for the first time in 17 races, the American winning silver behind Helen Jenkins (GBR), who won for the first time since 2012. 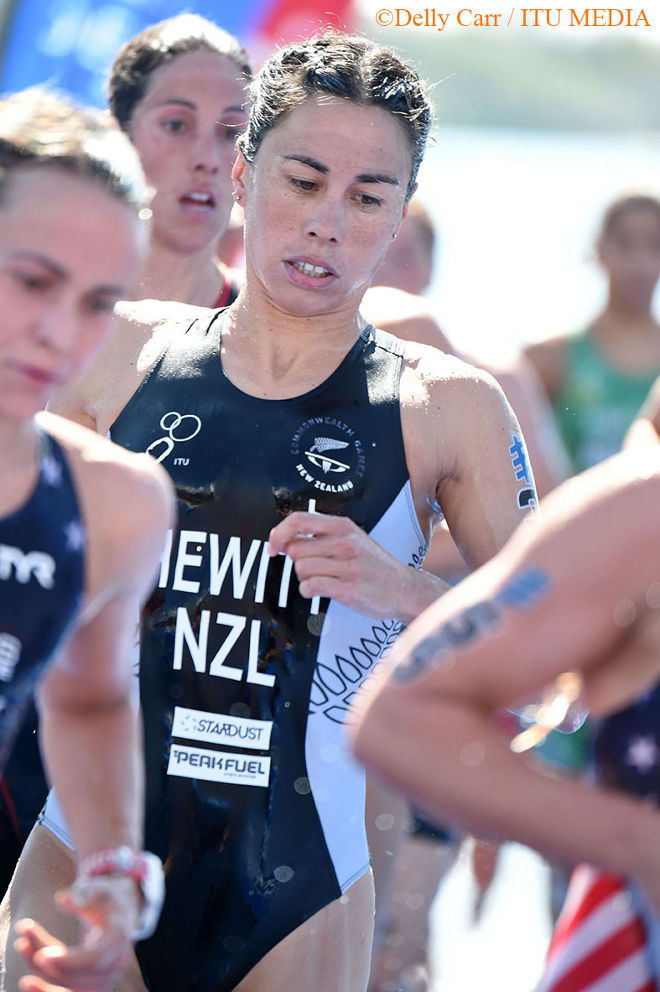 New Zealand played a prominent role throughout the race, with four Kiwis in the initial lead group of 19 out of the water, led by Nicky Samuels (Wanaka), Hewitt, Rebecca Clarke (Auckland) and Simone Ackermann (Auckland), but it was Hewitt who showed her great strength to instigate a breakaway that shook the race and ultimately the incredible unbeaten run of Jorgensen.

Hewitt, Jenkins and Flora Duffy (BER) simply rode off the front of a world class lead group, sharing the work and clearly the desire, the three athletes showed the rest how the great Jorgensen can be beaten – something that will surely not be forgotten with the Rio Olympics looming large in August.

The lead for the terrific trio was 1:31 at the end of the bike and for once, Jorgensen couldn’t chase everyone down, only catching Hewitt in the closing metres to outsprint the Kiwi for silver, with Jenkins well clear to earn an amazing comeback victory that books the British former world number one a place in Rio.

Hewitt was exhausted at the end of a race in which she laid it all on the line.

“I rode as hard as I could. I saw that some of the girls were struggling on some of the corners so when we got the break we just kept riding right up until the end. I felt a little wobbly on the run, but I tried to keep pushing, I was with Flora and then Gwen came up at the end. I tried a bit earlier in the sprint, but there was just the technical bit at the end. It was just a tough race. This is my first Olympic distance of the year and I braced myself on the run, I could judge on the U-turns where Gwen was and where Flora was. It just came down to the blue carpet at the finish.”

Jenkins showed tremendous form as she turned back the clock to her world dominating form pre the London Olympics, signaling that she has to be included in medal conversations for the 2016 Olympics. The Brit maintained her form superbly to win by 41 seconds.

The fierce pace on the bike and the constant turns and accelerations on a technical circuit took a toll on the field, with the run seeing athletes spread out over a wide distance.

Nicky Samuels was in just her second race on return from a yearlong injury layoff and came home in 20th place in what was another step forwards in her progress towards bigger goals this year. Simone Ackermann was next best of the Kiwis in 26th, Rebecca Spence – who had missed the lead group and rode into T2 some two and a half minutes down on the leaders, finished 29th while Clarke was 46th. 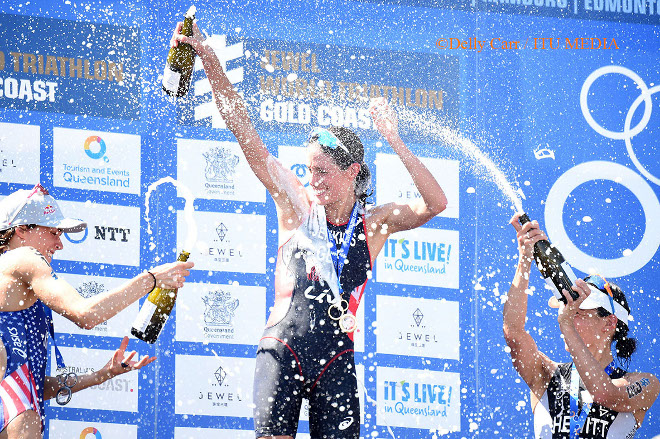 The men’s race was also a thriller in another stacked field as the Brits and Australians chased spots on the start line in Rio. Mario Mola led a Spanish one-two in the men’s race from Fernando Alarza, with Jonathon Brownlee (GRB) claiming bronze.

Braden Currie (Wanaka) was the only Kiwi in the men’s race as he made one last ditch effort to impress selectors with Rio in mind, but the gutsy Kiwi was not able to match the speed of the ITU athletes that he has bravely been looking to match in recent months, withdrawing from the race early on the bike after exiting the swim near the back of the pack to essentially bring a curtain down on his Rio dream, one that was however chased with typical Currie courage and tenacity.